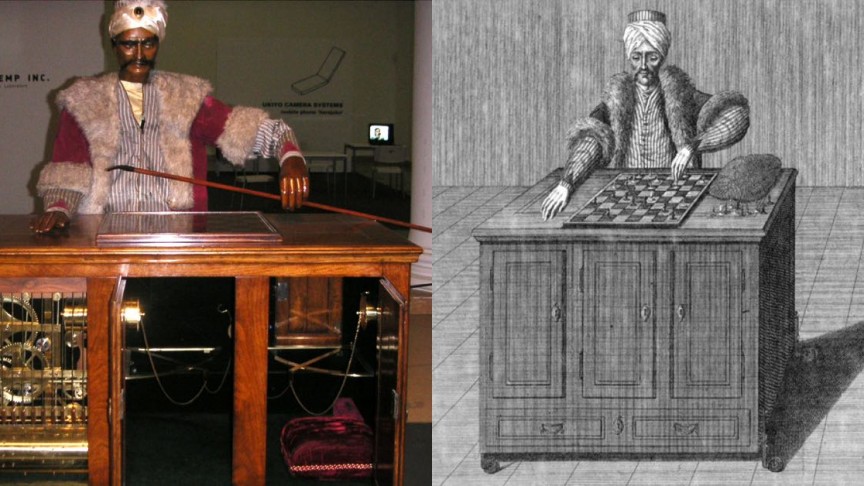 The Mechanical Turk, also known as the Automaton Chess Player, was a fake chess playing machine built in the late 18th century. The invention was conceived by the Hungarian engineer and inventor Baron Wolfgang von Kempelen in 1769. The machine was presented as an automaton playing chess capable of beating even the strongest challengers.

The first performance of the Automaton was for the Habsburg court in Vienna in 1770. It was exhibited thereafter, albeit somewhat intermittently, for the next 84 years. After Baron wolfgang Upon von Kempelen’s death in 1804, the Automaton was purchased by Bavarian showman Johann Nepomuk Maelzel.

In 1809, during the campaign of Wagram, Napoleon Bonaparte played against the Automaton in Vienna and was defeated. The automaton was in the private collection of Prince EugÃ¨ne de Beauharnais for some time until it was acquired again by Maelzel in 1817.

Other exhibitions followed around the world. But in 1837, Maelzel and the Turkish operator Schlumberger, who was the tutor of Pierre Charles Fournier de Saint Amant, died of yellow fever while returning from Havana in the United States.

From 1770 until its destruction by fire in 1854, the Automaton was exhibited by various owners. However, it ultimately turned out to be an ingenious, elaborate hoax.

Wolfgang von Kempelen designed, built and unveiled the Automaton in 1770, in order to impress Empress Maria Theresa of Austria. The system appeared to be capable of playing a powerful game of chess against a human opponent. He also performed the Knight’s Tour, a puzzle that requires the player to move a knight to occupy each square of a chessboard exactly once.

The mechanical Turk on the big screen

The story of the film and the book on the Mechanical Turk connects a collection of historical figures, from Napoleon Bonapart, Ludvig van Beethoven, Benjamin Franklin and Edgar Allan Poe to the pioneers of the computer age. The storyline offers an accessible way to examine the relationship between magic, man, spirit, and machine.

Inspiration for the making of the Mechanical Turk

When Wolfgang von Kempelen attended an event at the court of Maria Theresa of Austria at SchÃ¶nbrunn Palace, FranÃ§ois Pelletier was performing an act of illusion. von Kempelen was then inspired to build the Automaton, as it was first called. The story goes that after a conversation von Kempelen had with Marie-ThÃ©rÃ¨se, he promised to return to the Palace with an invention of his own that would surpass Pelletier’s illusions. And that’s exactly what he did.

The result of the challenge was the Automaton chess player. The machine consisted of a life-size model of a human head and torso, with a black beard and gray eyes. The Automaton was dressed in Ottoman robes and a turban, the traditional costume of an oriental sorcerer.

His left arm held a long Ottoman pipe at rest. Her right hand was resting on top of a large cabinet.

Placed on top of the cabinet was a chess board. The front of the cabinet consisted of three doors, an opening and a drawer that could be opened to reveal a red and white ivory chess set.

Famous people who played against the Mechanical Turk

Those defeated by the Mechanical Turk include: Benjamin Franklin, Napoleon Bonapart, and Russian Tsar Paul I. On a rare occasion, in 1793, FranÃ§ois-AndrÃ© Danican Philidor won a match against the Turc MÃ©canique in Paris.

How the Mechanical Turk worked

The Turk was a mechanical illusion that allowed a human chess master hidden inside to operate the machine. With a skilled operator, the Turk has won most of the matches played at his events across Europe and the Americas for nearly 84 years. The Turk has played with and defeated many challengers, including statesmen such as Napoleon Bonaparte and Benjamin Franklin.

The device was then purchased in 1804 and exhibited by Johann Nepomuk MÃ¤lzel. Chess masters who secretly operated the Turk included Johann Allgaier, Boncourt, Aaron Alexandre, William Lewis, Jacques Mouret and William Schlumberger. However, the operators within the mechanism during Wolfgang von Kempelen’s original tour remain a mystery.

During a performance, the showman opened two cabinets to display a large empty space. A third cabinet featured an area of â€‹â€‹tightly packed machines, presumably the brain of the craft. The secret of this hoax was that a man of normal height could lie down and hide in the machine and remain invisible to the public by repositioning himself during the initial display of the interior of the device.

Inside the Mechanical Turk

The interior of the machine was very complicated and designed to deceive anyone observing it. When opened to the left, the front cabinet doors exhibited a number of gears and cogs, similar to clockwork cogs. The section was designed in such a way that if the rear cabinet doors were open at the same time, one could see through the machine.

The other side of the cabinet did not house any machines; instead, it contained a red cushion and a few removable parts, as well as brass structures. This area has been designed to provide a clear line of sight through the machine. Under the dresses of the Ottoman model, two other doors were hidden.

These also exhibited watchmaking machines and provided an equally unobstructed view through the machine. The design allowed the presenter of the machine to open all the doors available to the public. That way he could maintain the illusion.

The Turk ended his glorious days at the Chinese Museum in Philadelphia where, unfortunately, he was destroyed by fire in 1854.

In 2005, Amazon.com launched Amazon Mechanical Turk (MTurk). The web-based software application that coordinates programming tasks with human intelligence. The service was inspired, in part, by the way Kempelen’s MÃ©canique Turk worked. The program is designed for humans to perform tasks that computers struggle with, such as color comparisons.

MTurk provides businesses with access to an on-demand labor market whenever a business needs it to connect to a variety of skills and capabilities through a global workforce.

Economist Tyler Cowan, in his book Average is Over, says, “The man plus the computer is a stronger player than the computer alone.”

Changes in Cuban participation in the Women’s World Chess Cup