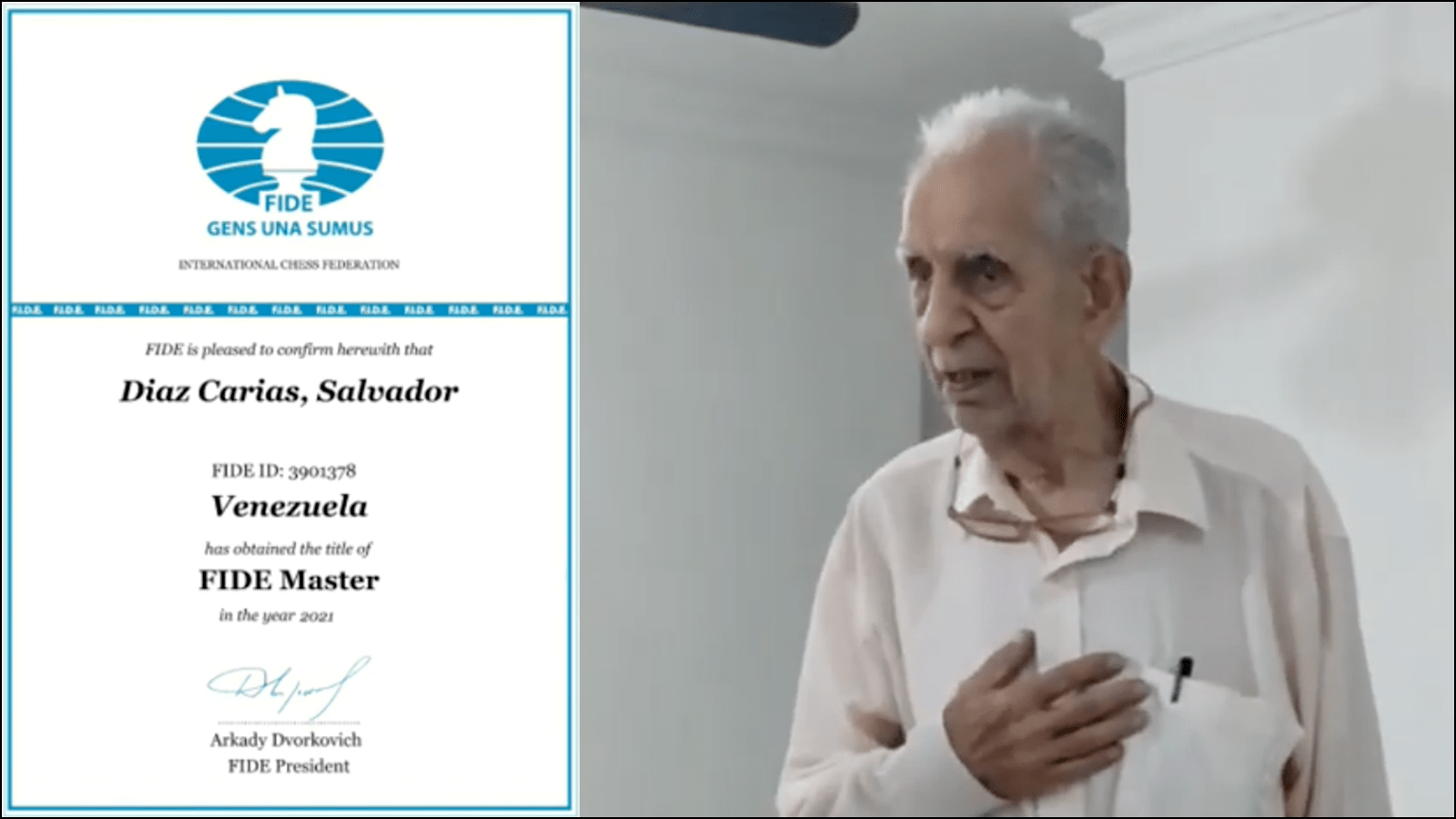 An 88-year-old Venezuelan chess player recently received a very nice surprise: his FM title. He was informed that FIDE had recognized the nomination for the title on the basis of the results he had achieved in the 1960s.

It’s a record that won’t be easy to beat: getting an official FIDE title at 88. This is what happened to three-time Venezuelan champion Salvador Diaz Carias de Caracas, who now lives in San Cristobal. He received the FM title shortly before turning 88 last Wednesday.

A video made by Diaz’s son in which he surprises his father with the news.

Diaz was born on June 23, 1933. He started playing chess relatively late, at the age of 20, in 1953. It was thanks to his good friend Luis Alberto Matos, who was already a good tournament player by then. and above all very aware of openings. , that he managed to play his first tournament, which was at the University of Los Andes, in the city of Merida.

The first big surprise for Diaz came when in that same tournament, in one of the matches, as a White, he beat the reigning Venezuelan champion, Andres Sadde, with an opening variation that Matos had taught him!

“This unexpected event had two consequences: a good one and a bad one,” Diaz wrote on Chess.com. “The bad news is that I quit studying the first year of engineering because I was completely absorbed in chess until the sun today.”

I was completely absorbed in chess until the sun today.
â€”Salvador Diaz Carias

From 1953 to 1960, he devoted himself to the study of openings and finals and to the study of the games of the great masters. During these seven years he became one of the best players in the country, to the point of winning the national championship in 1960 in the city of Maracaibo. He retained his title a year later in a match against Celso Sanchez Pouso, an MI in correspondence chess, who had won almost every tournament in Caracas. Much later, in 1978, Diaz won his third and final national title at San Cristobal.

After his second title in 1961, Diaz had to quit chess tournaments as he started working, first as a math teacher until 1965, then as a computer programmer for IBM. But he never completely gave up the game; for example, in 1964 he played for Venezuela in the Caribbean First Series, in San Juan, Puerto Rico. In this four-player team event, he won all of his matches to help the Venezuelan team remain champions.

Diaz participated in the famous Havana Olympiad in 1966, where he scored 11.5 points in 20 games, the best performance among the five players who represented the Venezuelan team. He shared the following anecdote:

During the Olympiad, we stayed at the Habana Libre hotel, formerly Habana Hilton. Me and two members of the team from Puerto Rico, whom I had met in the Caribbean Series, went up to the top floor of the hotel for a few drinks. When we entered we saw General Manager Bobby Fischer having a few drinks practically on his own. We greeted each other, because I already knew him personally since 1962, when he passed through Caracas, accompanied by GM Miguel Najdorf, who was temporarily residing in Caracas, and they were returning from their participation in the Mar del Plata Tournament.

By the way, Bobby and I played an informal game. Black found himself in a worse position in the Sicilian defense, in a variation I had learned from a Soviet magazine, but he equalized the position and, of course, he won the game.

I want to say that Bobby at that time was a completely normal person, friendly in his relationships, cheerful, in short, very different from the Bobby Fischer that all chess players started to question because of his behavior afterwards. have won the world championship.

Diaz also played in the 1968 Lugano Olympics, where he scored his best international performance: 10.5 / 15, with which he reached a rating of 2300 Elo. He will play another Olympiad, in 1978 in Buenos Aires, Argentina.

Diaz is still playing. As recently as 2020, he won a local tournament at the San Cristobal Fair.

About a year ago, Diaz’s good friend Nicola Nigro, a great promoter of Venezuelan chess, and Luisana Mujica, a former Venezuelan champion, started scrutinizing the data of Venezuelan players. They got a Chess informant from 1971 which showed the 2300 Elo. Immediately, they began to arrange for the validation of his title, knowing that this one requirement was enough for the title.

FIDE, a year later, confirmed that it would award the title on condition that the standard administrative fee of 70 euros be paid. When Nigro realized that the Diaz family couldn’t afford that sum – the incredible inflation the country has experienced in recent years means that amount now equals 266,000 Venezuelan bolivares – he decided to take care of himself. itself from the payment.

Diaz himself had no idea of â€‹â€‹any of this. He wrote: “You gentlemen of Chess.com, can you imagine what my joy was when I learned last week that at age 88 I had received this international title. I want to share that joy. , first of all with Nico and with you, and of course, with all the fans who love this beautiful game, which is getting even bigger, with the effects of this pandemic that we are experiencing. “

Along with sending a wonderful letter full of information about his chess life, Diaz also wrote to Chess.com: â€œI want to express the great satisfaction that overwhelms me knowing that a site as prestigious as the yours in the field of chess, showed great interest in telling me about my experiences in this discipline. “

The great satisfaction of telling this story is mutual.