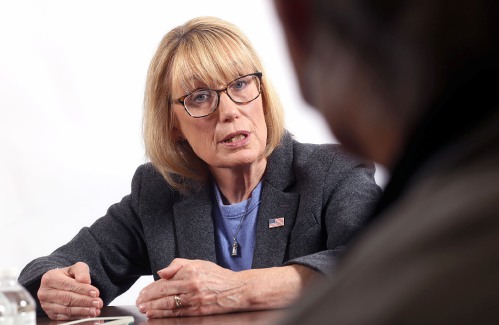 WEST LEBANON — When Maggie Hassan was governor, she liked to tell people that “nobody does democracy like we do in New Hampshire,” underscoring the willingness of Granite State lawmakers on opposing sides to work together to solve problems.

As a young U.S. state senator seeking a second term, Hassan again touts her cross-cutting credentials to an era of hyperpartisanship among lawmakers and the paralysis it causes in Washington.

According to Hassan, bipartisanship is not a dirty hyphen.

“I am proud to have been named the most bipartisan senator by the Lugar Center,” Hassan said during a meeting with Valley News staff, referring to his No. 1 ranking at the top of the group’s “Bipartisan Index” measuring which senators are most willing to collaborate with members of the other party. “I even found common ground with (Republican Senator from Kentucky) Rand Paul on issues of fiscal responsibility.”

Hassan, who boasts of securing a Republican co-sponsor for all 48 bills introduced last year and shows a comfort with the details of a wide range of laws, often prefaces his answers to questions with a desire to “stepping back” to tick off one’s accomplishments.

For example, when asked how she would tackle the issue of health care costs, Hassan – a former hospital lawyer and member of the Senate Committee on Health, Education, Labor and pensions – proudly points to ‘no surprise medical bill’ legislation. she elaborated with conservative Republican U.S. Senator from Louisiana Bill Cassidy who protects patients from being forced to pay fees such as out-of-network costs for emergency services and other treatments.

Hassan said she also advocated for the Affordable Medicines Act, which proposed to give Medicare the power to negotiate prescription drug prices with pharmaceutical companies. Bargaining power was finally passed in August as part of the Inflation Reduction Act.

This new power “will save hundreds of billions of dollars over the years, reduce the deficit and shore up Medicare finances,” she said.

But revealing her sometimes pro-industry leanings, Hassan, who was assistant general counsel at Brigham and Women’s Hospital in Massachusetts before entering politics, defended hospital consolidations as a good countermeasure against insurance companies because they offer hospital chains a “ladder” to better negotiate with insurers and have led to “volume-driven efficiencies”.

(She acknowledged, however, that “antitrust experts” argue consolidation “has reduced competition among hospitals and led to high prices.”)

As for what to do next to control spiraling medical costs, Hassan suggested that legislation to make telehealth more widely available in addition to “reimbursing providers for the telehealth services they provide” are “some initial thoughts.” “.

In New Hampshire, where Dartmouth Health is the largest private employer in the state, the most intractable economic issues of labor shortages, housing shortages, affordability and cost of living are all inextricably linked, explained Hassan.

She stressed the critical need to increase the health workforce by making training accessible to attract more people into the profession, especially for nurses and drug addicts. She said hospitals are facing nursing shortages because they compete with higher-paying travel nursing agencies.

“It has become a big, big problem, especially during the pandemic. It’s hard to blame the nurses who do the very hard work of working on the front line to earn a lot more money,” Hassan said.

“There are a number of senators who are trying to look at what’s driving him and trying to come up with a solution,” Hassan said, acknowledging that she didn’t “have a specific one yet” but eventually indicated. funding to train health care. workers.

One possible solution, she suggested, would be to reduce the time it would take for a healthcare worker to get their student loans forgiven to five years from 10 years.

As part of the Cut Inflation Act, those enrolled in Medicare Part D will have an insulin co-pay capped at $35 per month starting in January. Hassan called it a “big step forward” in controlling medical costs, but said it does not go far enough and should be extended to the 37 million people with diabetes.

A bill to expand the $35 monthly cap was introduced by Jeanne Shaheen, New Hampshire’s other Democratic senator, but was blocked by Republicans.

“We will keep pushing on this,” Hassan promised. “Prescription drug costs are a huge part of the puzzle right now.”

Hassan predicted that the CHIPS and Science Act – a bill to increase research and manufacturing of semiconductors in the United States that she introduced with John Thune, RS.D., which was recently signed into law by President Joe Biden — will pump money into the regional economy, particularly by boosting institutions like Dartmouth College, and in turn attracting young workers to New Hampshire’s tech sector.

An influx of workers for manufacturing jobs, Hassan acknowledged, would quickly come up against the area’s housing shortage and high cost of living that is holding back the Upper Valley’s economy. To that end, Hassan said, his office received help from Lebanon’s Upper Valley Business Alliance to draft a bill to increase the availability of housing for the workforce.

The bill would provide federal funding mechanisms to states through grants and matching fund programs to develop affordable housing, cited as one of the main obstacles to attracting workers.

“Among the things that people tell me are most important to them are the cost of housing, the cost of childcare and the cost of energy,” Hassan said, explaining that it’s why she supports the suspension of the national gas tax and the provisions that give people a tax. credits for improving the energy efficiency of their home.

Hassan noted that she also supported the expansion of the refundable child tax credit that was part of the government’s package of COVID-19 relief programs, but failed to secure an extension in the upper house.

“There weren’t enough votes in the Senate for that,” she said. “Republicans blocked it consistently. And there are a few members of the Democratic caucus who were not supportive.

Indeed, Hassan called the refundable child tax credit a “really important step that I support and one of the reasons” she is running for re-election.

On abortion, Hassan would not detail the “specifics” she would like to see in national legislation to protect a woman’s right to abortion, but regardless, she sees greater threat that must be stopped.

The urgency “is to prevent a national ban on abortion. It’s the No. 1 job here now,” Hassan said.

“My first priority is to protect the right that we still have after Dobbs,” she said, referring to the US Supreme Court ruling that struck down a woman’s constitutional right to birth. abortion, which she defined as “the broadest possible protection” so that “women have the freedom to make these decisions themselves.

Hassan said she didn’t want to be drawn into what would happen in Congress if, as many believe, the House and possibly the Senate returned to Republican control — “I’ll leave that to the pundits and the forecasters,” she said – but what if she is re-elected, her pragmatic attitude will endure.