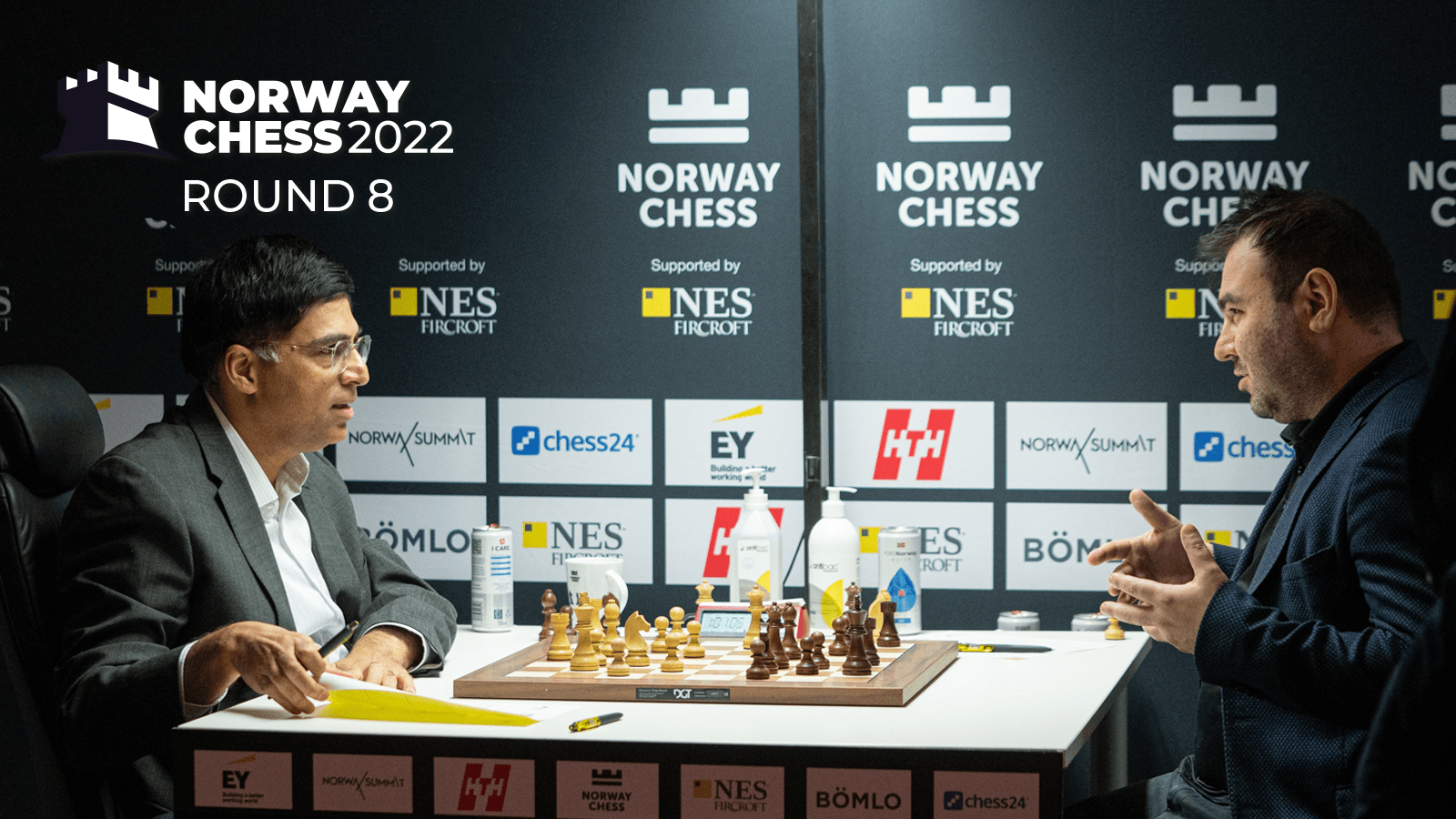 The Red Weddings of Norwegian Chess

With more twists and turns than an entire season of “Game of Thrones”, round eight of Norway Chess delivered more surprises, shocks and horrors than anyone could have counted on setting up an exciting final round. of the tournament.

Thanks to some sort of miracle, world champion Magnus Carlsen managed to avoid losing the classic to GM Maxime Vachier-Lagrave on Thursday, then picked up a victory in a chaotic game of armageddon. When former world champion Viswanathan Anand simultaneously lost after a horrible mistake against GM Shakhriyar Mamedyarov, the top of the standings changed drastically.

Just when we were content with Carlsen and Anand deciding this year’s edition of Norway Chess, we had so many complex and confusing games that commentators would be forgiven if they started making moves every time the rating bar changes. by three or more points.

The leader of the tournament, world champion Magnus Carlsen against the leader of the French Resistance, Maxime Vachier-Lagrave. These players have had countless memorable encounters over the years that have gone both ways, securing memorable victories for either side.

Carlsen opted for 1.d4, looking to see if the Frenchman had the hutzpah to play his favorite Indian Grunfeld or if he would accept a Queen’s Gambit or even give White the opportunity to play another Catalan. Those alternatives apparently didn’t seem so ideal for Vachier-Lagrave who dug in his heels and threw the Grunfeld onto the board.

Not really expecting to play a main line, Carlsen opted for the 7.Bb5+ line in the Exchange Varition. This isn’t considered particularly critical for black, but it takes the game away from some of the longer, more forced lines that the Grunfeld is filled with.

Although they had spent a lot of time in the opening, White seemed to be well on their way to securing a small but consistent advantage, when they opted for 15.Be4 and 16.h3?!, which essentially sent the game into an endgame where Black had an extra pawn.

Although it seemed manageable, all the pawns were on the king’s side with no apparent weakness, black definitely had some pressure. Add to that, Carlsen had put in a lot of time and that combination of short time on the clock with the requirement of careful defense is tricky to manage, even if you’re the world champion.

This combination of problems proved too much for Carlsen to handle, and after defending cautiously for almost twenty moves, the errors started to seep in, and suddenly Vachier-Lagrave had a winning position!

Despite much more time on the clock, the Frenchman also slipped, losing the advantage, not once but twice, and in the end gave the world champion a draw in a rook vs rook+crazy final. A very tight breakaway for Carlsen.

Had Carlsen lost the match, Mamedyarov would have taken the tournament lead.

Now, settling in for the Armageddon game is another matter after such a nervous affair. Players did this by rehearsing the classic game opening.

The game turned very different from the previous one as Carlsen strove for winning chances but pushed too hard with a position lost as a result. However, he kept fighting, Vachier-Lagrave made his own mistakes and the endgame was crazy with lots of passed pawns for Black and White trying to contain them. He managed to do so, but only after several mistakes from Black.

In what was an indicator of the day ahead, early leader and current number two in the standings, Anand unexpectedly fell in horrific fashion.

After a fairly calm and typical Petroff the odds were more or less even, with both players settling in for a few maneuvers to sense each other’s intentions, Anand began to play ambitiously but a little loosely. His 17.Bd3?! followed by 18.g4?! gained space but stretched his position somewhat.

Then followed what can easily be described as one of the biggest blunders of Anand’s career, 22.Qb5??. As soon as he let go of the queen, he quit. Afterwards, Mamedyarov said that he also thought that 22.Qb5 from Anand was the best move, and only realized he had won when Vishy quit!

Without a doubt, Mamedyarov, who is himself a fantastic tactician, would have spotted the winning move quite quickly.

American general manager Wesley So’s ambitions to win the tournament were shaken when he lost in the seventh round to resurgent Vachier-Lagrave. No doubt he had hoped to make up for that loss by doing bad things to former FIDE World Champion GM Veselin Topalov.

However, as Berlin’s defense in the Ruy Lopez, an opening So plays himself, emerged on the board, the definition of bad things changed to nothing too serious. Very quickly, the players cut wood and sent the match-up to the Armageddon game.

In Topalov’s armageddon games in this tournament, we’ve often seen him willing to play the same or very similar lines he’s chosen for his classic games. That, however, was not to be in this game…it went in a totally different direction with So playing 1.c4 and heading into a somewhat obscure line of symmetrical English.

Black then made the very serious decision to exchange his bishop fianchetto to c3, a concept endorsed by Danish GM giant Bent Larsen. White castling kingside, Black queenside – the battle was on. However, it was Black who made the greatest progress after almost completely closing the queenside with …b6 and …Na5.

In a somewhat desperate attempt to create complications, So sacrificed the rally, the game sharpened but clearly only to the advantage of Black who had a dominant position. A few loose moves got White back in the game, but he never got more than the tie, and when So pushed for more, his position crumbled, allowing Topalov to win the full point and the victory of Armageddon.

The return of RiRi! Dutchman Anish Giri and Norwegian GM Aryan Tari once again set the summit as they have done on several occasions in recent months.

After his seventh round loss to Mamedyarov, Giri was eager to vindicate himself while Tari, on the other hand, was on a high after beating Carlsen for the first time in an official match.

To this end, Giri opted for the London system, which seems almost contradictory to his usual, highly prepared and theoretical approach. He played a decent novelty, but whether it was born out of opening preparation or inspiration on the board is unclear. In any case, he took the advantage from the opening.

White seemed to be steadily increasing their advantage and around time control it seemed so big that Giri was looking for a way to convert the advantage, but finding nothing obvious he resorted to playing on his time problems. opponent. This is generally bad advice and Giri has missed several good opportunities in connection with this approach.

Slowly but surely Tari came back into the game, and after several mistakes by Giri, Black even took the lead. Playing in increments, Tari was not immune to making mistakes, and at move 57 he made the decisive error, allowing White an unstoppable passed pawn.

Two players who will likely want the tournament over, so they can move on with their lives and, in the case of GM Teimour Radjabov, travel to play in the Candidates Tournament which begins next week in Madrid, Spain.

In response to Radjabov’s 1.e4, Wang Hao deviated from his usual Sicilian Sveshnikov, and opted for Petroff instead, which was probably an awkward surprise for Radjabov who would face Petroff if he plays 1.e4 in Madrid , leaving him with the following dilemma: do I play my candidate preparation or can I propose something else to the board of directors? Fortunately, Wang opted for 4…Nc6, the line that fellow GM Yu Yangyi had won the FIDE Grand Prix in the spring.

Radjabov spent a lot of time on the opening moves and seemed certain to run into timing issues. But as the queens came off the board, he settled into a faster pace of play. However, this also manifested in the fact that his initiative slowly but surely faded away, and around move 20 the players began to swap pieces at a steady pace to head towards a draw position.

For the Armageddon game, Radjabov, now forced to win the game, did not feel like repeating the Petroff and so responded with 3.Nc3, entering a Four Knights instead. Wang then chose the sharp gambit line 4…Nd4.

Radjabov, however, was wise to avoid crazy tactics with Wang, who worked magic in his armageddon match against Topalov, refusing to eat gambit pawns, preferring the safety of a balanced position and waiting to to hit.

At move 15, Wang made an error of engagement which gave him an awkward position and shortly afterwards cost him a pawn. Once with an advantage in his hands, Radjabov never let go and won the game convincingly, never allowing Black even the slightest hint of counterplay.

Ranking of the eighth round 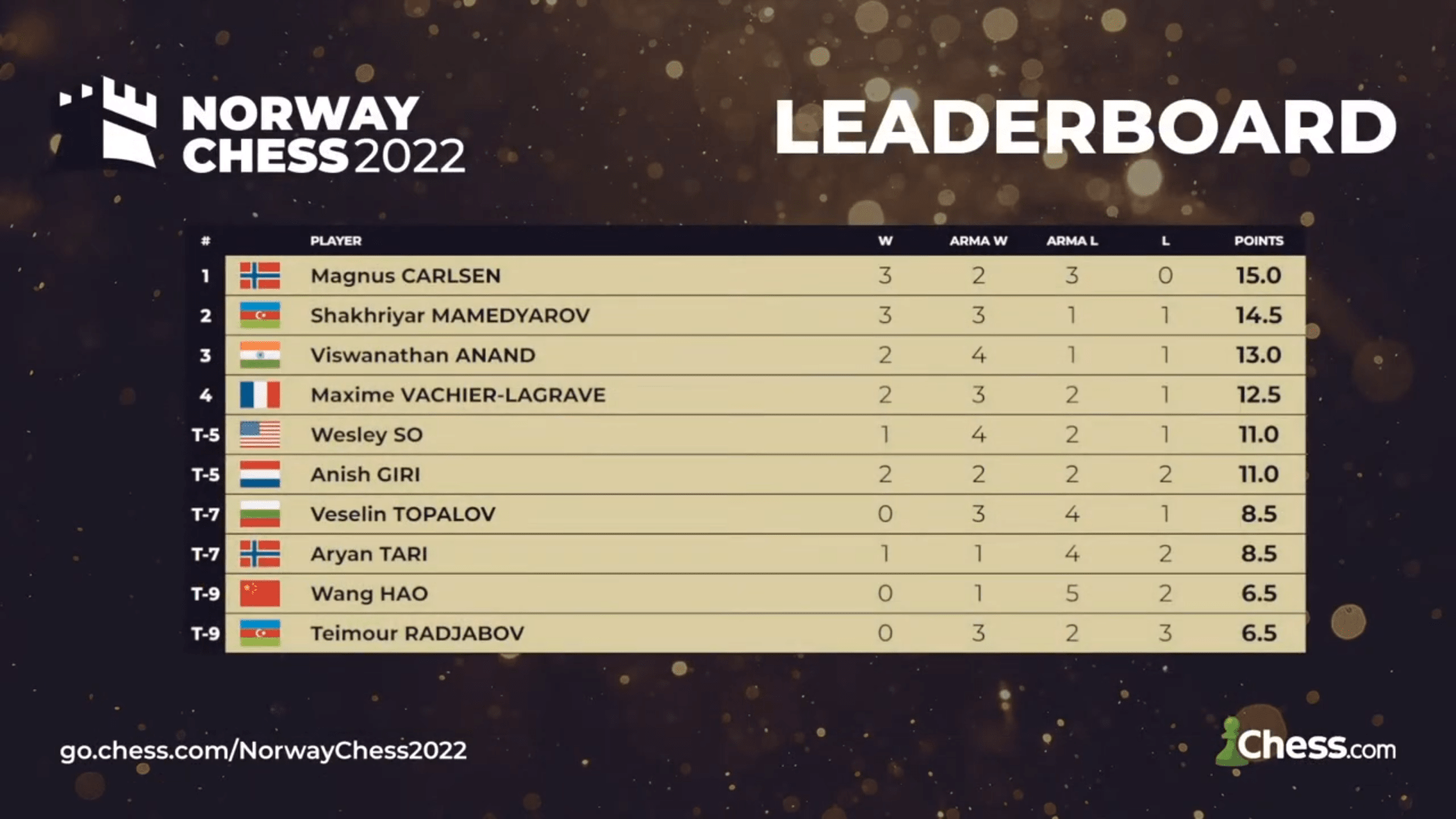 Norway Chess 2022 runs from May 31 to June 10, 2022. The event consists of a 10-player round robin in a classic time control of 120 minutes for play with a 10 second increment after move 40. The scoring system is three points for a win instead of the usual. If the game draws, the contestants play a game of armageddon with the winner scoring 1.5 points and the loser 1 point. The price is 2.5 million Norwegian kroner (NOK).