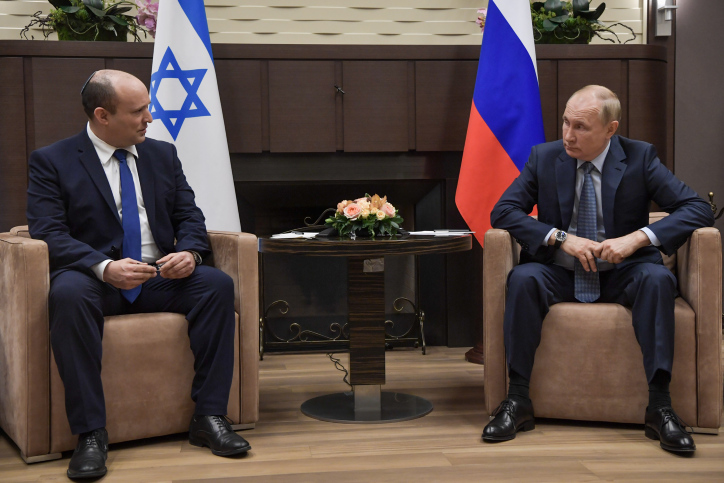 (December 20, 2021 / JNS) Russia has assembled around 100,000 troops near its border with Ukraine, raising international concerns about an imminent invasion. US President Joe Biden and Russian President Vladimir Putin held a video call last week in which Biden warned of serious consequences, including “strong economic measures”.

The National Coalition Supporting Eurasian Jewry (NCSEJ) hosted a webinar featuring Ukraine’s Ambassador to the United States, Oksana Markarova, in which she discussed the current threat and expressed her hopes for a peaceful outcome.

Markarova noted that Russia is not only a military threat, but also a hybrid threat from Ukraine by spreading disinformation and carrying out surveillance and intelligence gathering activities.

As the days go by, the question remains whether Russia will actually launch an attack and Markarova has said she believes some steps need to be taken immediately to prevent such a scenario.

â€œWe believe the number one priority is to demotivate Russia. The international community must threaten serious consequences [if Russia attacks],” she said.

Markarova praised Biden for his long discussion with Putin, saying â€œwe are grateful to the United States for all efforts to deter Russia. â€¦ We appreciate that our friends are united with us.

She said that we also need three levels of deterrence.

First, there is a need for political deterrence, including diplomatic messages, discussions and warnings; economic deterrence such as sanctions; and security / defense deterrence.

“All the instruments of deterrence will make us stronger and we hope to find a diplomatic solution,” she said, adding that “we are doing everything possible to deter and demotivate Russia”.

Markarova noted that sanctioning Russia after an invasion might be too late and that it would be more prudent and logical to impose sanctions now as a deterrent and then remove them when Russia achieves its de-escalation goals.

“We are asking our friends to impose sanctions,” she said.

Russia has already been sanctioned by the international community for its bellicose actions in Crimea and Donbass, which includes the Donetsk and Lugansk regions.

“But Russia has not yet changed its behavior,” lamented Markarova, adding that she hopes the international community will impose additional sanctions on Russia.

Regarding the commitments made by NATO, the European Union and the United States to protect Ukraine, Markarova acknowledged that Ukraine is not a member of NATO, “and we understand that it does is not obliged by its charter to defend us “.

She said Ukraine’s goal is to become a NATO country.

â€œFor us, what is important is to increase our capacities and our preparation. We are only asking NATO to help us. We have a lot to offer NATO countries and NATO as an organization. We have a very capable army and we are ready to help our partners. “

Markarova pointed to Israel, which for her “was an inspiration” because it is a “small country capable of defending itself”. She noted that a large part of its population is nationalist and that many Israelis are ready to defend their country.

Israel has diplomatic relations with Russia and Ukraine, and if the two countries end up engaging in war, Israel could face a diplomatic maze in which it will have to expertly maneuver to avoid damaging its relations. with either country.

“The situation will remain the status quo”

Boris Morozov, of the Cummings Center for Russian and East European Studies at Tel Aviv University, told JNS that while Russia “plays chess on different desks,” its relationship with Israel is still “viable,” while like Israel’s relationship with Ukraine, pointing out that Israel’s ambassadors in the two countries are “very good and very experienced”.

Even if Russia invades Ukraine, Israel “will remain neutral and try to preserve normal and viable relations with the two countries, as we do now when the two countries act as enemies, but without war,” he said. declared. “Israel can follow the line without sabotaging the relationship with either.”

Morozov explained that the reason Putin is threatening Ukraine is because he is showing his dissatisfaction with a number of issues, including NATO’s encroachment on Russia’s borders.

However, Morozov said he believes Russia is genuinely taking advantage of the current circumstances as it controls the Ukrainian and European situations.

He pointed to the Nord Stream 2, the submarine pipeline that would carry natural gas from Russia directly to Germany, as leverage that Putin is using against Europe.

According to Morozov, everyone is trying to exploit this situation, including Ukraine because it wants – and receives – financial, military and political assistance.

â€œI hope everyone calms down,â€ he said. â€œRussia will probably have its gas supplied to Europe, and both sides will be happy. The deal will include Ukraine, so it will also be happy. Russia will likely get guarantees from the United States that it will not accept Ukraine or Georgia into NATO, and basically the situation will remain the status quo.

Morozov noted that Putin does not need or want to control the eastern part of Ukraine. â€œHe already has enough problems with Crimea, not just with political sanctions, but with the real management of the country. “

â€œPutin is also happy because now everyone is running after him and talking with him. It shows him and the Russian people that it is important, and that Russia is strong without war, â€he said, adding that Putin assembling troops at the borderâ€œ is more about bending over. muscular, but with a slight possibility of climbing. “

Vera Michlin-Shapir, visiting scholar at King’s College London, told JNS â€œWhile we cannot be sure that Russia will invade Ukraine, there are serious signs of deteriorating security situation on the border. Media reports in reputable US media and the recent visit of the CIA chief to Moscow make it clear that US officials view this as an immediate and present danger.

â€œAs for Israel,â€ she said, â€œit depends on how the situation develops and the pressure from the United States for an Israeli response. Even if Israel did not want to take sides for fear of a Russian response, ultimately Israel cannot (and should not) challenge the United States when it comes to a United Nations vote on a subject that the United States considers essential. strategic question.

Dima Course, a postdoctoral fellow and lecturer at Ariel University, told JNS he thinks Putin is bluffing. â€œThere are few goals for such behavior,â€ he said.

The course highlighted Putin’s efforts to increase pressure on the West. Washington is occupied by China, Iran and other crises abroad, and it is fragmented at home. In addition, it is fighting a global pandemic. According to Course, Putin is trying to offer a reduction in tensions in exchange for the lifting of some sanctions, or at least the prevention of new sanctions.

â€œRussia is in a deep, multi-faceted crisis – the economy is in bad shape; they are struggling to slow the epidemic; the popularity of the ruling party and even of Putin is decreasing, â€he said, adding that Putinâ€œ is not getting any younger, â€and it seems that the elites in Russia have already started to compete for power shares. â€œIn such a situation, a full-scale war with Ukraine can be disastrous,â€ Course said.

Putin’s bluff “is extremely dangerous,” he warned. “Every provocation from any side, every mistake on the pitch, can lead to a major clash with unforeseeable consequences.”

â€œIsrael must remain neutral,â€ he asserted, asserting that Israel must maintain cooperation with Russia in Syria, as they do not interfere with IDF attacks on Iranian targets there.

Course also noted that Israel is “unable” to help Ukraine anyway. He suggested that Israel keep its “fingers crossed so that there is no serious conflict”.

â€œIn this scenario,â€ he said, â€œour relations with Russia could be damaged even if Israel remains neutral, simply because of our strategic ties with the United States and the EU.