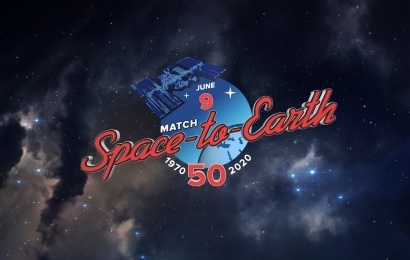 Russian Grandmaster Sergey Karjakin played a game of chess against cosmonauts Anatoly Ivanishin and Ivan Vagner on Tuesday June 9 to celebrate the 50th anniversary of the first Space-Earth game. The cosmonauts were 400 km above Earth on the International Space Station, which recently hosted NASA astronauts Bob Behnken and Doug Hurley and their SpaceX spacecraft, while Sergey played from the Museum of Cosmonautics from Moscow, exactly 50 years after the first match played in 1970..

The game was hosted by the Moscow Museum of Astronautics, the Russian Space Agency Roscosmos and the Russian Chess Federation and broadcast live from 11:00 a.m. CEST, in English.

The game ended with a quick and clean draw, where almost every move was played perfectly:

2016 World Championship challenger Sergey Karjakin doesn’t need to be featured on a chess website. Cosmonauts Anatoly Ivanishin and Ivan Vagner have been on the International Space Station since April 9, when they arrived with NASA astronaut Christopher Cassidy.

They were recently joined by astronauts Douglas Hurley and Robert Behnken, whose SpaceX vehicle was the first to launch from U.S. soil since the Space Shuttle last flew in 2011 and the first ever-to-orbit commercial spacecraft. NASA estimated that 10 million people watched the launch, with their arrival on the ISS also broadcast across the world:

There are few details on the match to be played against Sergey Karjakin except that Space plays White, but its value is symbolic, marking 50 years since the first match of this type.

Cosmonauts Andrian Nikolayev (1929-2004) and Vitaly Sevastyanov (1935-2010) were the first humans to spend two weeks in space (Neil Armstrong’s Apollo 11 flight to the moon and back a year earlier lasted a little more than 8 days), with their Soyuz 9 flight with a final duration of nearly 18 days, that is to say exactly â€œ424 hours of weightlessnessâ€, as indicated by the commemorative stamps.

The mission was in preparation for the Soviet Union’s first space station, with Vitaly Sevastyanov in 1986 tell russian chess journal 64:

When Nikolaev and I were preparing for our flight, they told us: â€œYou are going to fly for a long time. You need to think about how to spend your rest time meaningfully during the hard work of the flight. What do you want to take on the spaceship? “Andrian and I were very passionate about chess and together answered:” Chess! Against all expectations, psychologists were suspicious. â€œYou two are on the flight. It will turn out that one of you is always beating the other, and there may be unnecessary negative emotions for the loser. It’s not good. “” Come on, “we objected with one voice.” On earth, we play at the same level. Why should one of us always win in space? “

Psychologists gave in, and chess went to space, although it was a special chess set designed for weightlessness by a young engineer called Mikhail Klevtsov. Magnets were not allowed (and still are not allowed today on the ISS) due to their potential for interference with instruments, and parts were instead held in place but movable by a series of grooves, the mouth of a sleeping cosmonaut â€(Sevastyanov).

The game lasted 6 hours, or 4 Earth orbits, with players only able to transmit their movements when the spacecraft was over the Soviet Union. You can get a glimpse of the game in this video dedicated to Vitaly Sevastyanov:

The game ended in a draw, which you can replay below:

“Space” missed the best chance to conquer Earth on the 23rd move:

One of the most interesting things about the game is that it has been widely commented on by top Soviet chess players. David Bronstein wrote in the Izvestia journal:

This game will undoubtedly go down in the annals of 1000 years of chess history as the game that extended the sphere of influence of this wise game beyond our planet. Anyone can understand the emotion with which I watch the movements sent from space. The first game “Space – Earth” is very interesting to play on a board. From the moves, it’s easy to see that both parties love sharp and confusing situations and don’t lack courage and invention to create them. And the fact that neither team managed to win is testament to the skill of the players not only in attack but also in defense.

Later that year, on November 24, 1970, the cosmonauts visited the Central Chess Club in Moscow for an evening with world champion Boris Spassky, former world champions Mikhail Botvinnik and Tigran Petrosian as well as other players from high level.

It was right in the middle of Interzonal de Palma de Mallorca which would mark a radical change in chess, with Bobby Fischer winning by a whopping 3.5 points margin. Of the six players qualified for the matches of the candidates for the World Championship, only Efim Geller and Mark Taimanov represented the USSR, with Fischer, Bent Larsen, Robert Huebner and Wolfgang Uhlmann taking the remaining places. Alexander Kotov, best known today for his book Think Like a Grandmaster, referred to this as he tried to look 40 years ahead, that is, until 2010, that night:

I am sure that then we will not have an interzonal tournament but an interplanetary tournament. And the gray-haired former world champion Boris Spassky will release a big article where, as a journalist, he will criticize the organizers who for some reason gave weak Jupiter players two places, reducing by two. the representation of the lunar baseâ€¦ And chess lovers, gathered in an even more luxurious club to assess the outcome of the Interplanetary Tournament will of course recall the first game played in space which opened a new era for the ancient game.

At the time, it was hard to imagine that the last men to have traveled to the moon would have done so two years later, in 1972, without any Soviet cosmonaut ever standing on the moon.

Three-time world chess champion Mikhail Botvinnik also referred to the interzonal tournament when talking about the head of the cosmonaut training program:

36 years ago, I saw Nikolai Petrovich Kamanin for the first time, if I am not mistaken, in the Peterhof Grand Palace not far from Leningrad, when the Chelyuskin hero were in the spotlight. At the time, we were both very young and both could have become cosmonauts. Now, of course, I’m not cut out for this anymore.

I look at General Kamanin with great envy. Although we are the same age, he took great care of himself and takes care of our cosmonauts. On top of that, I have already quit playing chess myself, while Kamanin, as we just saw, continues to perform well in events.

From the stories of Andrian Nikolaev and Vitaly Sevastyanov, it became clear to us what difficulties a man faces in space. The first is physical weightlessness, which can be compared to what participants in the interzonal tournament in Palma de Mallorca feel, when there is only one day of rest every 9 days. The second difficulty is, if we can put it that way, intellectual weightlessness.

When a man finds himself on Earth in everyday life, he is constantly faced with the solution of complex problems or, to put it another way, “inaccurate problems”. It’s not that easy to cross a street, deciding how to spend an evening – going to the movies, the theater, or finding something more frivolous. But on a spaceship, a man has none of these, and he can forget how to solve complex and inaccurate problems. And here failures come to the rescue because failures are a typical, complex, and inaccurate problem. After all, it has long been known that chess players â€œdriftâ€ and have difficulty finding the right decisions.

I am not in any way suggesting that cosmonauts should be chosen from among chess players. On the contrary, I think that if our grandmasters play like they played at the start of the Interzonal Tournament in Palma de Mallorca (not counting, of course, Geller), then we will need to find chess reserves among the cosmonautsâ€¦

Of course, since 1970, chess has been played in space, with some astronauts having had a lot of time because they spent hundreds of days on Mir and now on the International Space Station. The American Chess Federation notably organized a Earth vs. Space Match give children the chance to face astronauts. Chess is always a great photo opportunity!

Tuesday’s game will be a memorable celebration of some of the early pioneers of space flight.