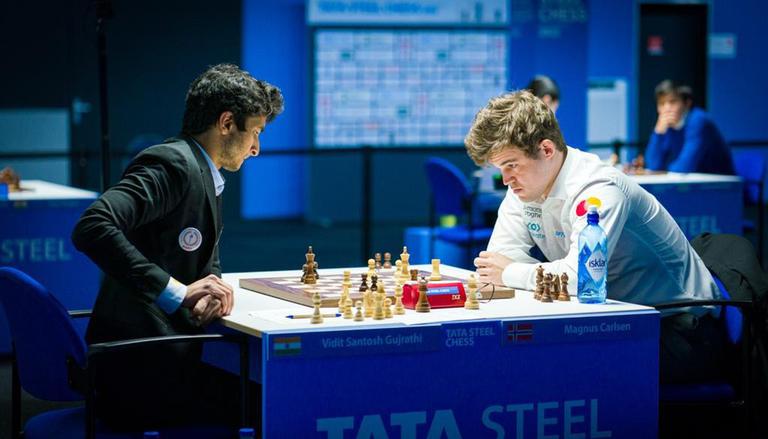 World number 22 Vidit Gujrathi surprisingly held world number one Magnus Carlsen to a draw in the eleventh round of the Tata Steel Masters chess tournament on Friday to retain fourth place with six points.

Meanwhile, the Norwegian continues to hold the lead with 7.5 points despite missing a clear winning opportunity against Gujrathi. With two more rounds remaining in the competition, it will be interesting to see who finishes on top. Here’s a look at the updated standings after 11 rounds of the tournament and a quick look at the results from other games.

In the eleventh round of the Tata Steel Masters chess tournament, world number one Magnus Carlsen attempted the Italian match against Vidit Gujrathi by playing Nc3. The Indian GM played the opening well and equalized the position.

While Gujrathi managed to evade threats in the opener, the world champion managed to cause the 27-year-old Indian several problems midway through and late in the game. Despite the world number 22 mistake on move 28, Carlsen couldn’t take advantage of the situation as he erred on move 36, which allowed Gujrathi to escape with a draw.

World number seven Anish Giri suffered a disappointing loss at the hands of compatriot Jorden Van Foreest which dropped him to third in the Tata Steel Masters standings after 11 rounds. Meanwhile, Richard Rapport moved up to second after picking up a forfeit victory after his opponent Daniil Dubov tested positive for COVID.

16-year-old Indian GM R Praggnanandhaa lost to world number four Fabiano Caruana to remain in twelfth place with two others on 3.5 points. The teenager put up a good fight against his more experienced opponent as the game was well balanced before Caruana took the initiative and claimed the victory in 46 moves.

The polarizing ‘chess player’ Medvedev has a dark side

“He is the quintessential chess player”