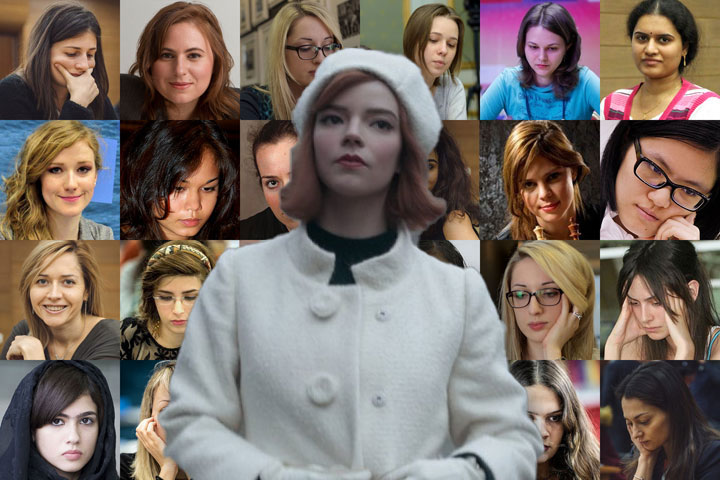 The Netflix series has attracted a vast new audience of people who have become interested in the game. Beth Harmond has become a household name, eponymous for female excellence in chess. But the reality, now that China’s Hou Yifan, who is ranked 83rd in the world, has entered semi-retirement and is focusing on academia (she is now a professor at Shenzhen University), there is no only one active player in the top 100. And only a handful in the top 1000.

Experts have sought explanations for the difference between the sexes. In 2015, Nigel Short, vice-president of FIDE, affirmed in The Guardian that “men are programmed to be better chess players than women, you have to accept that with grace.” The greatest player of all time, Judit Polgar, who has a winning record against Nigel, told The Guardian: â€œIt’s not a question of biology. It is just as possible for a woman to be the best of any man. But there are so many difficulties and social boundaries for women in general in society. This is what is blocking him.

The Guardian addressed the subject in a Nov. 29 article by Sean Ingle. He reports that FIDE President Arkady Dvorkovich is doing everything possible to make the game more welcoming to women:

The organization has designated 2022 as â€œthe year of the woman in chess,â€ but Dvorkovich accepts that more can be done to help women advance to the top. â€œAround 13-14 years old, we see that the girls leave while the boys continue to play in large numbers,â€ he adds. â€œWe need to change that. Personally, I would also like to see more women in the top 10. But chess is not just a professional game.

And Judit Polgar: She points out that most men’s attitudes have changed since a time when legendary world champion Bobby Fischer used to regard female players as’ terrible ‘, telling them to’ stay strictly on the ball. House “. She says

â€œToday most of the best players wouldn’t even dare say – or even think of it that way, Fischer was the most ridiculous. And another world champion, Garry Kasparov, also said some things because he has grew up in that kind of environment.

â€œBut when I got in the picture and tortured Garry at the board, little by little he changed his vision. So that’s what I’m saying: a lot of people think that people – or the community – can’t change. But it is possible. “

Read the full article “‘It’s not biology’: Female failures hampered by low numbers and sexism” in the Guardian

You can’t say we’ve ignored the topic of gender difference in chess. Here are the articles we have published over the past ten years. Anyone want to do a science article on it?

Amanda Chen: Addressing Sexism in Chess: A Guide to Making Chess More Inclusive
04/13/2021 – Nature or culture? Many more men play chess than women and with a score of 2658, Hou Yifan is the number one player in the world, but on the world rankings list she is in the 85th place. The numbers alone suggest that there is a gender gap in chess. But why? And how should the chess world handle this situation? Amanda Chen, chess fan and political science and women and gender studies student at Rutgers University shares some observations and insights.

Wei Ji Ma: What is the gender gap in chess?
10/15/2020 – If you want to compare the performance of chess between men and women, writes Professor Wei Ji Ma of NYU, given their very uneven numbers, it is a very bad idea to focus on the best players. male and female. If you do, you’ll need to account for the payout gap using an analysis similar to the one it presents. Professor Ma provides the tools necessary to refute the theory of female inferiority.

Money: Why Women Lose in Chess
10/05/2020 – Mint, one of India’s premium business news publications, just published an article written by Omkar Khandekar focusing on the rating gap between top male and female chess players. The author questions whether these are conventional gender roles or unequal access.

Investigate gender differences in recognizing chess patterns
02/21/2020 – Here is an opportunity to support chess research. Tom Koolen presents himself as an “interdisciplinary data scientist” and a chess player, who tries to start a research project using the crowdfunding platform GoFundMe. WIM commentator Fiona Steil-Antoni promoted the project on social media.

Alexey Root: “Female chess” and on an equal footing
12/16/2019 – As Honorary Director of the London Chess Conference, which in 2019 had chess and the empowerment of women as its theme, Grandmaster Judit PolgÃ¡r wrote: … Meanwhile, the national federations are using up their resources, and public subsidies are increasingly creating competitions for women only. It is high time to reflect on the consequences of this segregation, because at the end of the day our goal must be for women and men to compete on an equal footing.

David Smerdon: The best (and worst) countries to be a chess player
5/4/2019 – Australian Grandmaster and Doctorate in Economics DAVID SMERDON recently published an in-depth analysis on how female participation rates differ across the world. The results are surprising: the countries with the best gender equality rankings do not have a higher participation rate for women – on the contrary, in fact! The author suggests some hypotheses to explain this phenomenon. Must read.

Wei Ji Ma: Women in chess: role of beliefs on innate abilities
05/30/2015 – What could the chess world learn from the problems of the academic world, regarding the participation of men and women? This “gender gap” is much larger in physics or musical composition than in molecular biology or psychology. A recent study found that what matters is whether people think you have to be brilliant to be successful in the field. Professor Wei Ji Ma explains what this study might mean for chess.

FrÃ©dÃ©ric Friedel: Debate on chess gender in the international press
04/21/2015 – The last issue of the Dutch magazine New in Chess contained an article entitled “Long live the Difference!”. Former world championship challenger Nigel Short provocatively asserts that there are genetic reasons why men do better at chess than women. The two-page article went viral, was picked up by international news services and generated a global media storm.

Robert Howard: Explaining the male predominance in chess
06/19/2014 – There are two theories to explain the male predominance at the peak of intellectual achievement: some attribute it to innate differences in evolutionary abilities, others to social factors in today’s society. Robert Howard from Sydney, Australia sent us the most in-depth and documented article we’ve seen on this topic – we urge everyone to read it.

Peter Zhdanov: Do women have a chance against men in chess?
03/08/2012 – As we all know too well: Most of the strongest players in the world are men. In the past, we have speculated on the reasons for this gender gap, with heavy reader participation. On International Women’s Day, Peter Zhdanov, married to a very strong player, provides us with valuable statistics, comparing men and women country by country. Eyes open.

The World of Chess Streaming – BusinessToday

Did the best chess player in the world just give…