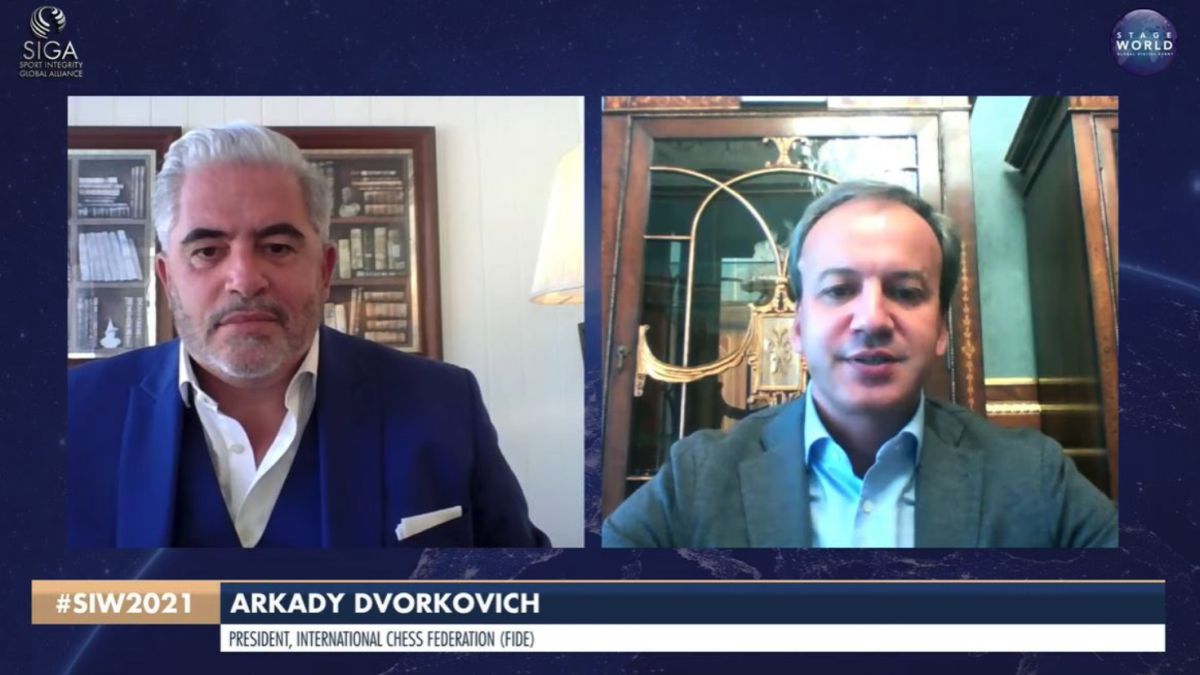 “Chess can help improve the intellectual capacities of people, especially young people. Chess teaches us to respect our opponent. Chess teaches us how to take wins and losses with honor and pride. How to analyze your mistakes, improve your strategic thinking and your memory.

This is how Arkady Dvorkovich, the president of the International Chess Federation (FIDE), presented some of the main benefits that the game can bring to society. He then explained the huge progress that has been made in women’s chess and also how people with disabilities and autism are included in the project. Refugees and prisoners have also been at the center of concerns around the world as the federation expands, he said.

Dvorkovich gave a speech at SIGA Sport Integrity Week 2021 and, after promoting their activities, partnered with the organization’s CEO, Emanuel Medeiros, to answer a few questions.

The recent growth in popularity was the first topic of discussion, with a suggestion that The Queen’s Gambit – an extremely popular Netflix series – could have been an influencing factor. While the president of FIDE acknowledged the positive impact of the show, he also highlighted the extra time at home imposed on people by the covid-19 pandemic.

â€œYou couldn’t go to football matches, to sports centersâ€¦ But you can play chess anywhere,â€ he reminds us.

“The social dimension of chess, starting with schools, is the most important component”, Dvorkovich said: â€œand speaking to all kinds of communities and categories of potential players.

â€œBut to do this, FIDE must change, improve its management capacity and be even more intensive and [have] better interaction with all its constituencies.

“FIDE is not only about official tournaments or world championships, it is about promoting youth education, gender equality, the values â€‹â€‹of fair play. In chess, we are firmly opposed to all. types of discrimination. We also do our best to support players with disabilities. ” pic.twitter.com/q2rtn6adNq

Understanding the size of this business, Dvorkovich admitted that they were learning from other organizations such as the experiences of FIFA and FIBA. Projects to help with this are already underway, he added, most of them from companies in Russia.

The most important topic of discussion was clarified by Medeiros: maintaining the integrity of the industry. “Integrity is king,” he added. Dvorkovich gave an in-depth response in an attempt to allay any potential concerns.

â€œA few months ago, we adopted a new charter which sets a very clear structure for the FIDE bodies. Now we are complete all the regulations that will govern each organization and activity in particular, including, especially for integrity, the code of ethics and discipline. He then joked that he hoped the prevention methods would mean that punishments were not often needed.

â€œWe need this framework so that everyone knows we’re serious about this. “

Fight cheating and corruption in chess

Dvorkovich then underlined the importance of those who govern chess, like him, to be role models and to be completely transparent, “which we are, I think,” he said. A number of changes have been made and they continue to learn as they develop their efforts.

“Intolerable” was the President’s word for computer-assisted chess chess. but he made it clear that he believed it was a “minor issue at the highest level” and one that will be fought hard – with AI algorithms identifying offenders – and clear warnings having been sent along with it. legal support.

Alongside UEFA and World Rugby, Medeiros thanked his guest and the entire Fide community for their adherence to SIGA standards.

â€œWe welcome Fide to the SIGA community and are very keen to work alongside you, as well as the The ability to go through the independent SIGA scoring system is a real game-changer.“

Sport Integrity Week â„¢ aims to promote the implementation of the highest standards of integrity at all levels and in all areas of sport.

Sport Integrity Week â„¢ 2021 takes place on an engaging digital platform allowing you to network with like-minded peers. The week featuring interactive live panel discussions via SIGA’s online events platform will host a series of interviews with some of the world’s top sports leaders.

Queen’s Gambit is chased by a real Soviet chess player