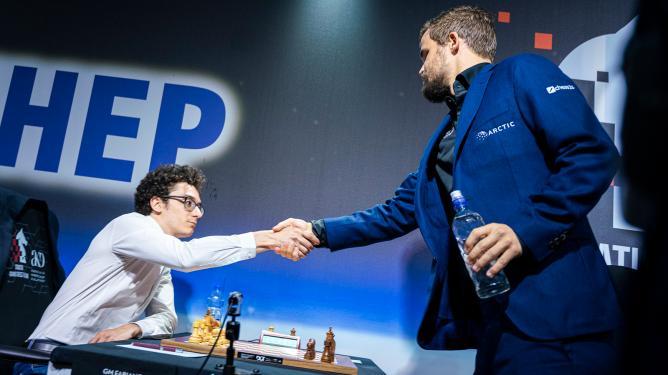 Coronavirus: Should players shake hands before a game of chess?

Growing concerns over the novel coronavirus raise questions as to whether players should always shake hands before and after a game of chess. In a new medical safety protocol, FIDE advises against it.

With 3,200 people killed by the coronavirus and more than 92,000 infected in more than 70 countries and territories, the coronavirus affects all segments of society. In the chess world, events such as the Dubai Open and the Open HDBank have been canceled, GM Wei Yi and GM Zhao Xue have respectively missed tournaments in Prague and Lausanne, and GM Ding Liren is currently in quarantine in the Moscow region before going to Yekaterinburg. for Candidates.

Two days ago, we asked on Twitter if chess players should always shake hands before a match and included footage of German Interior Minister Horst Seehofer refusing to shake hands with Chancellor Angela Merkel more early in the day.

As concerns about the coronavirus grow, do you think chess players should always shake hands before the game? ?? pic.twitter.com/4Cey8ZoEEG

It is quickly becoming socially acceptable to refrain from shaking hands. A punch or a pat on the back are often considered alternatives. The International Chess Federation now recommends not to shake hands during FIDE events.

On the website of the next Senior World Team Championship (5-15 March in Prague), a medical safety protocol was published, the text of which was largely based on a similar protocol which was in effect at the FIDE congress last week in Abu Dhabi.

The protocol aims to “minimize the chances of transmission of the COVID-19 virus [sic*] during the next FIDE events which will be held in February, March and April 2020. “

Approved by the FIDE Board of Directors, the protocol appears to have been primarily intended for the FIDE Congress. The following sentence, taken from the protocol of the Senior World Team Championship, still refers to it:

Avoid handshakes, hugs, kisses on the cheek, and other close personal contact with other conference participants and others present. [Underlining by Chess.com.]

Is this the official FIDE recommendation for players and referees at FIDE classified events in the future? It is not entirely clear at the moment.

This recommendation was aimed specifically at Congress, where you could usually shake hands with dozens of people every day.

However, under the current circumstances, no player will be penalized for skipping the handshake before the start of the game.

It’s also not clear whether handshakes are actually mandatory. In January 2008 there was the infamous ‘handshake incident’ in Wijk aan Zee, where Managing Director Ivan Cheparinov refused to shake hands with Managing Director Nigel Short. The great English master then complained to the referee, referring to a decision by the Presidential Council from six months before:

Any player who does not shake hands with the opponent (or greet the opponent in a normal social manner according to conventional rules of his society) before the start of play in a FIDE tournament or during a FIDE match (and does not do so after requested by the referee) or deliberately insults his opponent or the officials of the event, will cause the game in question to lose immediately and definitively.

Initially, Short got the full point. The appeal committee then decided that Cheparinov should be given the opportunity to apologize. The game was rscheduled for the next free day and won by Short (who then said: “There is a God, and he is not Bulgarian!”).

However, it seems that the “mandatory” pre-match handshake has never been incorporated into official FIDE regulations, although it may be considered a violation of the rule. Code of ethics.

In response to an email from Chess.com, international referee Omar Salama suggests a pragmatic approach:

â€œThe idea of â€‹â€‹shaking hands is to show respect to the opponent. It has been included in the tournament regulations to require players to shake hands or greet politely at the start of matches. I recommend players. just salute politely, that’s enough for me. They showed respect to the opponent. Just say hello or good afternoon, etc. unless the rules of a certain tournament say otherwise. “

Japanese bow of respect would be a fine
to replace.

â€œI think the problem with the coronavirus is very dangerous. As avoiding a handshake is included in the measures that FIDE has published to help combat the spread of the virus, I would have no problem if the players were enforcing it during a tournament. As Mr Salama said, a polite greeting between the players should suffice. Of course, I would inform the players accordingly, before the start of the first round of the tournament. “

As many chess fans have noted on social media, it’s unclear how effective it is to avoid shaking hands, when players will touch the same chess pieces if they capture something. thing. Therefore, other general recommendations, such as frequent hand washing and not touching your face, are in place.

Given the advice from the world body FIDE against the handshake, chess may need to develop new protocols, such as a nod at the start of the game, and the old-fashioned king knocking down so that he resigns. A referee polishing the pieces after each shot (like in snooker) may be too much.

* The protocol uses rather inaccurate technical terms as it talks about both “Covid-19 disease” and “Covid-19 virus”, it varies in capitals, and it uses the now defunct term “2019-nCoV” .

Even cancer can’t quell his passion for chess | Goa News