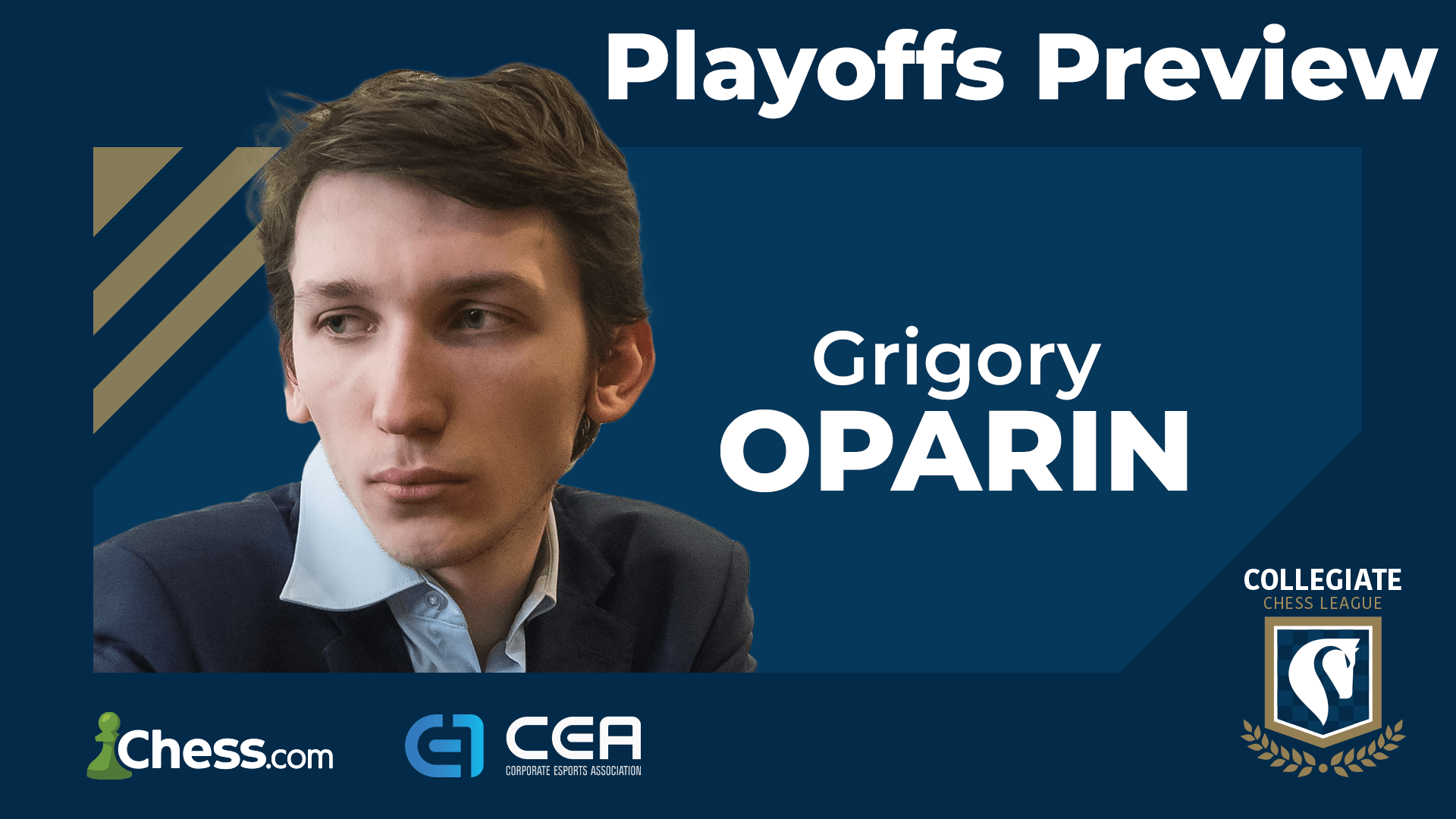 With the end of the regular season, the team standings were finalized and the playoffs were set. The playoffs are finally here, and the teams will fight for their share of the $ 25,000 prize pool. Be sure to tune in and watch the ultimate conclusion to our biggest season yet!

The matches are broadcast live on Twitch.tv/collegiatechesleague with commentary from League Commissioner Joe Lee with surprise guests to be announced.

Highlights of the 7th round

In the first division, three of the four places for the quarter-finals were already won, and the last place to win would go to UChicago or Mizzou. UChicago had beaten Mizzou the week before, so Mizzou needed a win as well as a UChicago loss in the seventh round to reclaim second place in his group. Mizzou took the win over last-place Rutgers and UChicago needed a win over Georgia Tech to clinch second place, sending them straight to the quarter-finals.

The UChicago team must have taken a page from GM Jon Ludvig Hammer’s Advanced Bongcloud Theory coursebook, as 12 of their 16 games were Bongclouds. UCicago’s top two draws got a combined score of 6.5 / 7 with their Bongcloud games. The bottom two boards were less fortunate with a score of only 0.5 / 5 with their Bongcloud repertoire.

In the end, the game boiled down to a game between top school boards, GM Awonder Liang for UChicago and MV Andrew Titus for Georgia Tech. UChicago was just one point ahead 8-7, and they had made a last-minute substitution in their lineup, which cost them a penalty point. A draw in their match would mean that an 8.5-7.5 win would be canceled out by the penalty at 7.5-7.5, and they needed a win to clinch second place in their group. Despite a perfect 3/3 score with the Bongcloud, Awonder decided to change his flawless opening against frontman Georgia Tech. GM was still able to win with the lesser known “Sicilian closed”.

In Division Two, there was another fight for a place in the quarterfinals. Cornell was trailing Purdue by one point in the standings, and a win or draw would put him in second. However, Cornell’s side had other intentions as they started the game with a 4-0 first-round sweep. In one of those four games, Cornell’s third draw, WFM Kimberly Liu (who broadcasts on twitch) gave Purdue’s FM Jonathan Rosenthal their only loss of the game. Liu’s mighty knight cemented to the g6 outpost square proved intolerable to his opponent, and under the pressure of time, he placed his own knight in the corner at h8 to trade him. Kimmy jumped at the opportunity to trade and forced his tower to resume, and after the c5 move, removing his second tower from the defense of e6, his towers easily infiltrated along the e file, gaining his multiple pawns. along the way. She ended the game with a nice turn sacrifice, ignoring Black’s threat to take her turn by simply playing h7 with the threat of making a new queen in h8. The FIDE captain had no other answer than to resign.

Cornell will hold onto that lead for the remainder of the game and will win 9.5-6.5 overtaking Purdue in the standings to secure a place in the quarterfinals.

Spotlight on the players

A few of our players have made accomplishments this week that deserve to be highlighted. Congratulations to NM Andrew Titus of Georgia Tech for winning the $ 500 prize for his club for achieving the highest cumulative score over the eight weeks of our club’s weekly arenas. Andrew didn’t even play in the first two arenas of the season, but once he started joining he quickly caught up. He finished each arena in the top three and finished the last two arenas in first place to clinch the award in a spectacular way.

Andrew was also the only Georgia Tech player to hold UCicago’s second draw tied in their Division One game. GM Praveen Balakrishnan won the rest of his games in UCicago’s win over Georgia Tech, but he might have gotten a perfect score if he hadn’t played Bongcloud in every game. However, when you become GM, you can play any openings you want. Kudos to Praveen for officially winning the GM title last weekend!

Perhaps this week’s most impressive achievement comes from GM Grigoriy Oparin, Mizzou’s top chess board, who placed third in the FIDE Chess.com Grand Swiss, behind GM tournament winner Alireza Firouzja and GM Fabiano Caruana. . His unbeaten performance tied him with the US GM at 7.5 / 11 points, but only secured third place on the basis of the tiebreakers. By finishing third in the Grand Swiss, Oparin wins a place in the 2022 FIDE Grand Prix as well as a prize of $ 40,000. His tournament highlights include his draw against GM Levon Aronian as well as his draw against GM tournament winner Alireza Firouzja. Below is perhaps his best tournament win in the 10th round against general manager Nikita Vitiugov.

Clip of the week

This week’s clip is from the Division 10 seventh round game between Howard University B Team and Wake Forest University.

This table shows the number one team in their group in each division. The top team is from Group A and the bottom team is from Group B. Schools are divided into groups according to their location. These teams as well as the number two team in each group will automatically qualify for the quarter-finals. Most of these teams were able to keep their number one spot from last week, but some of them managed to secure the top spot in the last round. These teams are Wake Forest A, LSU A, WUSTL C and Ramakrishna MVCC. Congratulations to all these teams for winning their group in the regular season. Earning those spots gives them a higher seed in the playoff bracket and helps them face weaker opponents based on the standings. These advantages are important for success in the playoffs.

With the regular season ending last week and the standings finalized, the playoffs are expected to begin this weekend. There will be four knockout rounds: wildcard, quarter-finals, semi-finals and finals. The wildcard matches are due to be played this weekend starting Saturday, November 13 at 10:00 a.m. PST / 7:00 p.m. CET, and the winners will face their quarter-final opponents the following day Sunday, November 14. The semi-finals will take place next weekend. on Saturday November 20, and the third place match and finals will be played on Sunday November 21.

Each division has 12 playoff teams, with the top two in each group already qualifying for the quarter-finals. This leaves eight teams to play in the wildcard match to determine the remaining teams for the quarterfinals. The parentheses for each division are linked below. You can submit your own playoff bracket predictions using the bracket links for each division. One month diamond subscriptions are awarded for the best slice prediction for each division. You can submit a split prediction, so completing all ten brackets gives you ten chances of winning a membership. Compare your media with those of your friends and see who made the best choices!

Division 1: With Mizzou losing two regular season games to UC Berkeley and UCicago, they face early elimination as they fell to fifth place out of 12 and are set to play in a wildcard match against Princeton led by the GM. Andrew Tang. Hopefully the Mizzou squad will see the return of their star GM Grigoriy Oparin as they haven’t lost a game with him in the lineup. He was definitely a key part of the Mizzou squad that won the championship last year, and he will be vital for that team to defend their title this year. The winner of this match will play against UChicago in the quarter-finals.

Section 2: Duke A, tenth seed, beat the University of Benin, leader of Group B, last week by a solid score of 10-6. However, it was in the regular season, and Benin have already secured a place in the quarterfinals. Now Duke must face seventh-seeded UC Berkeley B in the wildcard round in order to advance to the quarter-finals where they would again play against team Benin, but this time with money at stake.

Section 3: CentraleSupÃ©lec lost its first two spots in the seventh round and must now face Team Caltech A in order to play against Team A from the University of Florida, the team that claimed their spot in the quarterfinals last week.

Section 4: USC Team A must face off against University of Michigan Team B in order to reach their UCLA B rivals.

Section 5: The University of Florida B team lost to second-seeded Duke C by a narrow 9.5-6.5 score in the final round of the season. Now Florida must face Rice B to secure the rematch against Duke. Can they get their revenge, or will Rice stop them and take their place in the quarterfinals?

Section 7: Number one seed Baylor is waiting to play the winner between UW Milwaukee B and Northeastern B. Can either of those teams stand a chance against the unbeaten Baylor side?

Section 8: Drexel B was robbed of his second place finish by Sacred Heart in the last game of the season. Can Drexel go through the USC D team to get revenge on the Sacred Heart?

Section 9: The winner between UCSD C and SRMIST will face the undefeated team of Miracosta.

Section 10: UC Berkeley’s F team will face Cornell’s D team in the Battle of the Bears. The winner will face seeded USC E.

Many of these matches will be streamed live on Twitch, so be sure to check them out!

The full list of division standings and playoff pairs can be found here.