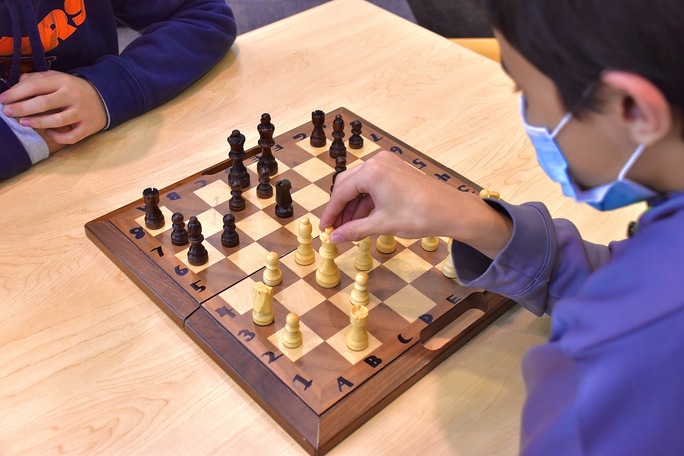 The chess team have just kicked off their 2021 season in person, hoping to dominate this year with new and old faces. The Mustangs host conference games on Tuesdays and tournaments on Saturdays. Eight players compete between eight boards. The best player of the team is placed in the first table and the rest of the participants are distributed in the same way on the rest of the tables. The first board allows you to score the most points from a win, and that number decreases to board eight. At the end of the competition, the winners are counted from each table and the scores are counted for each opponent against their tables.

The chess team started their season with two wins over Waubonsie Valley (38-30) on November 2 and Neuqua (45-23) last Tuesday. However, the game against Neuqua accumulated to a deceptive score. The competition was reduced to a game which, if the Mustangs had lost, would have resulted in a draw. Now, with two new victories for Metea, the coming season looks particularly promising.

â€œI’m excited about our level of talent this year,â€ said coach Thomas Womack. “We also have some very good first year players so we should be a strong team for years to come.”

Womack has advised the team for eight years and this year coaches alongside Jason Haymond. Womack hopes the team can finish in the top 15 in the state this year. It helps the team prepare for matches with an elaborate ranking system. Each day, 60 people are paired and each Thursday, teammates compete to climb the rankings. On the day of the conference competition, the top 15 players prepare for the tournaments.

Senior Ayush Jain played chess for the Metea team for four years. Jain generally plays on the upper decks of Mustangs. During his last years on the team, Jain got more and more involved in the world of chess.

â€œMy mom takes me to tournaments and I have a very supportive family,â€ Jain said. â€œMy friends and I started around the same time and we all played together [and improved]. “

Jain has aimed even higher than Womack, hoping to make the top 10 in the state this year.

â€œI am very excited to return to the state in person,â€ Jain said. â€œThe experience is so much fun and it was honestly the best part about chess. Hopefully we get to the top 10, especially looking at how good the team is this year.

Part of the team’s success comes from the weekly practice sessions held at the LMC, where players strategize and compete to prepare for the competitions to come.

â€œWhen I play chess, I analyze all the different variations available in the position and which variation will give me the greatest advantage,â€ Jain said. â€œIn complete silence, we play and we only focus on the game. Preparing for a match is mostly about reviewing my openings and if I know who my opponent will be, having the opportunity to look at my opponent’s score can be. be a crucial factor in winning a game.

Like any other team sport, chess relies heavily on an inclusive community between players and coaches to help create a progressive atmosphere and promote success.

“My relationship [with my coach is] really close, â€Jain said. â€œOver the years the coaches have gotten to know me very well and how I act and behave. You could basically say we’re friends.

The chess competition season starts at the end of October and runs until the beginning of February and is open to all genders. The Mustangs encourage other Metea students to consider joining, regardless of their level of experience.

â€œYou will have the time of your life,â€ Jain said. â€œThere is always someone ready to help you improve. You don’t need to know how to play chess to participate. We promise you will start having fun as you get better.

The Mustangs face Naperville North in conference this Tuesday and take part in the West Chicago tournament this Saturday.

â€œI am extremely proud of the team and the quality of their play,â€ said Jain. â€œThe preparation paid off and they certainly deserve a round of applause for all of their efforts. Keeping this team spirit alive is crucial. I really appreciate the hard work Womack and Haymond are doing for this school year.