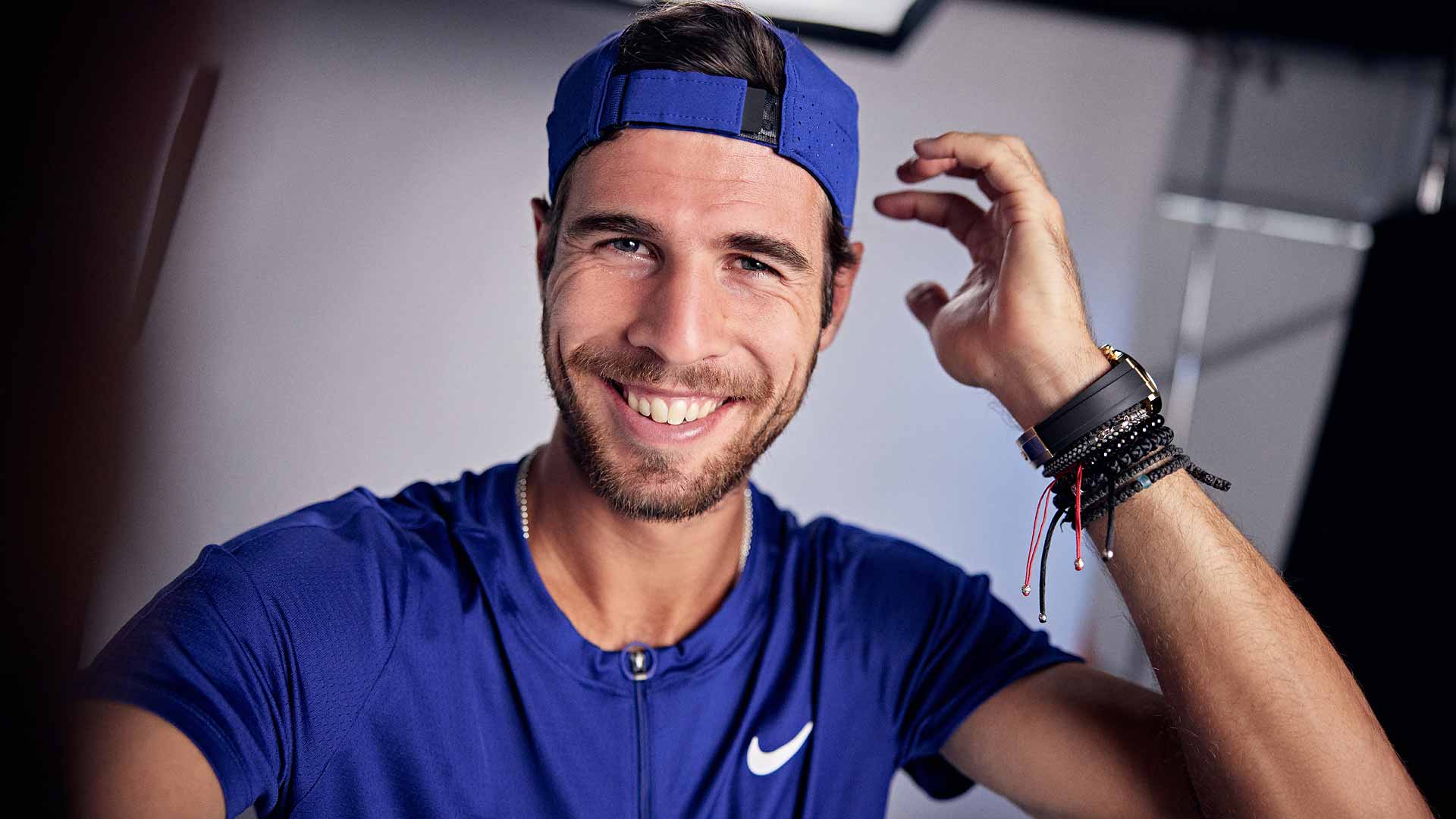 When Karen Khachanov was a child, he did more than train to become a professional tennis player. The Moscow native swam, played basketball and competed in athletics.

But from the age of 10-11, he also took chess lessons. Instead of blasting forehands and smashing backhands, Khachanov learned to outsmart his opponents on a 64-square board, where no amount of physical power or foot speed could help him.

“[In chess] you have to think all the time. You have 100 different combinations and variations with each move. It always depends on the figure your opponent will move. There always have to be tactics and for sure it’s also a mental game,” Khachanov said. “You have to stay sometimes three, four hours in a competition if we are talking about professional failures to sweat and try to think of a single move [for] maybe 30 minutes.

“You break your head and that’s the really interesting part of chess.”

Some see Khachanov’s power from the baseline and miss the tactics he uses to position himself for his biggest shots. In a way, he believes that all the thought that goes into the sport makes it similar to chess.

“I think there are similarities because you always think about the type of shot you can make, tactics are also one of the most important things in tennis,” Khachanov said. “[It is about] where you hit, how far, how high, percentage of serves, where you’re going to stay, where you’re going to come back and all those things. Of course they matter. It’s not that simple, I would say, but there are some similarities.

One of his coaches, Jose Manuel ‘Pepo’ Clavet, is also a chess fan. When they are together, they play two or three games a day.

“I think for him it’s good to play chess because it’s a good way to concentrate, really concentrate on a game for 30 [to] 35 minutes,” Clavet said. “With every movement you have to have a plan, like in a tennis match where you also have to be very focused the whole match, so I think it’s good for him to play the chess !”

Khachanov does not constantly follow professional chess tournaments, but he knows the biggest stars in the chess world like Magnus Carlsen and Hikaru Nakamura. He also watched The Queen’s Gambit, which he called “one of the most beautiful TV shows I can remember on Netflix.”

“I think [I play chess] the same way I am in tennis,” Khachanov said with a laugh. “I try to be the same way.”

Clavet added: “I think Karen plays chess in general like [he does] tennis. He is aggressive in both games! Obviously he plays better tennis than chess, but either way he likes to attack!”

Khachanov is also a basketball fan, attending NBA games when he can, as he did earlier this year at the Miami Open presented by Itau. The 26-year-old was a huge Miami Heat fan when he was younger, watching LeBron James, Dwyane Wade and Chris Bosh lead the team to glory. He is a huge James fan, which led him to follow the Los Angeles Lakers more closely, although he is still a Heat fan.

“I think the way he is, the mentality he has in the sport, what he [has] already achieved. He is one of the best athletes. Let’s say [he is like] Cristiano in football, Messi in football, him, Jordan… like Rafa, Novak and Roger in tennis,” Khachanov said. “He’s one of the best basketball players. I think the way he stays motivated and always looking forward to playing at his best and always scoring the way he does, it’s sometimes hard to explain.

On the pitch, Khachanov has been one of the most consistent players on the tour in recent years. Since August 2018, he has been housed in the Top 35 of the Pepperstone ATP Rankings without falling out of that group.

“Sometimes you just look forward to being better. Sometimes you can be worse too so somehow I never look back and think I’m Top 20, Top 30, Top 35. I always look forward to achieving my goals and try to move forward,” Khachanov said. “I’m always thinking about how I can improve to move up the rankings, to get back into the Top 10. That’s my ultimate goal. I work every day to try to find what I need [to do]the best I can do.

Khachanov hit his career-high world No. 8 in July 2019 after winning the Rolex Paris Masters, an ATP Masters 1000 event, the previous November.

But one of his most impressive performances was a defeat. At the 2018 US Open, Khachanov pushed Rafael Nadal to the limit in a four-hour, 23-minute loss in four sets.

“I always think of New York. It’s one of my favorite Grand Slams I would say, especially Arthur Ashe Stadium. The game against Rafa that I played in 2018, the emotions, the adrenaline, it’s one of the good ones to remember,” Khachanov said. “That’s why coming back to New York, I always want to TO DO.”

It’s performances like these that make Khachanov confident on the court. The 27th seed still believes he can match anyone on his best day.

“It’s a very important thing, first of all believe in yourself, believe in your abilities, what you can do when you play your best, where you can be and which players you can beat, how far we can go. It’s obviously one of the mental parts, [the] the belief that you can do well,” Khachanov said. “You can go out there and still lose a game and there’s no shame in losing it. It’s the belief that you can go far and win it all. That’s what it takes and it’s It’s a very important part of my game and of tennis in general.

For Khachanov, his game is like a puzzle made up of components, some related to his physical tools and others to the mental side of the sport.

“All of these parts are really important to put together,” Khachanov said. “[With them] I can achieve what I dream of.

The next step in realizing those dreams will be defeating Montreal champion Pablo Carreno Busta on Sunday at Flushing Meadows.

Dmitry Medvedev: The West is playing chess with death | State and National News