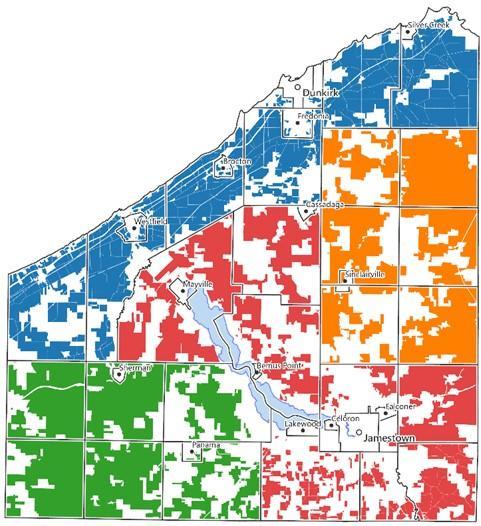 New York State recently approved Chautauqua County’s final Consolidated Agricultural Districts. The county’s first agricultural district was formed in 1972, with the last district forming in 1995, for a total of 13 districts. These districts were created when one or more landowners with at least 250 acres of land submitted a proposal pursuant to New York State Department of Agriculture and Markets (AML) law to the New York Legislature. county to form the district. Over time, the AML was revised to include an eight-year review of agricultural districts to assess the district, and landowners could apply to have their land added to or removed from the district. With 13 districts and a review required every eight years for each individual district, the program was difficult to manage and difficult for landowners to understand. In 2010, the Chautauqua County Planning and Development Department (CCDPD) began consolidating agricultural districts to streamline the program, which facilitated county program implementation as well as landowner understanding. . The CCDPD finalized the latest round of district consolidations this year, with state approval in May.

The consolidated districts and next eight-year review are as follows:

map by Chautauqua County Department of Planning and Development