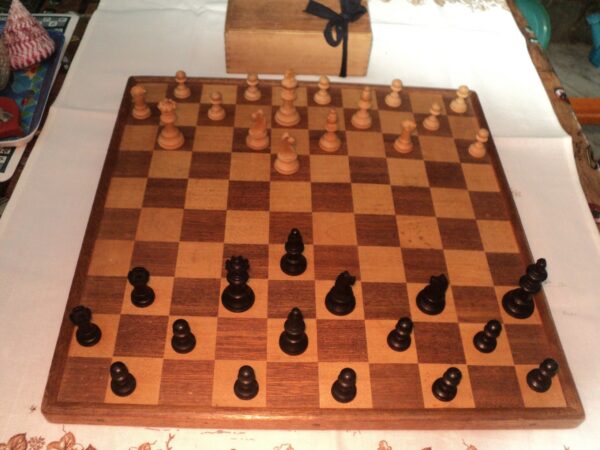 A Botany Downs reader shares the story of her husband’s loss, the importance of Anzac Day and a wonderful hand-carved chess set by a war veteran

While the lockdowns have been hard on everyone, I think they’re much worse for people who are alone.

I found out about this first hand as initially my husband Graham was here but he was unwell and so when it was time for ‘Standing At Dawn’ on Anzac Day I did it myself -same.

However, several neighboring households were there a little later. It was quite strange to be there in the dark. I took an electronic candle and then there was the wonderful sound of a bugle call. I will never forget this Anzac Day 2020.

Earlier when Graham wasn’t so ill, we went for Valentine’s Day at the RSA and there was music on the deck of the RSA too, but after that Graham’s health deteriorated.

One evening, he came out of the kitchen after making a coffee, then suddenly fell to the floor and the cup made a thud.

I ran to him and he said to me: “help me up”. These were his last words.

They transferred him from Auckland Hospital to Middlemore Hospital to facilitate my visit. It was an awful visit as there was a long wait to pass the sentries at the entrance.

When I finally saw Graham, he was alone in a room. I talked to him to see if he would wake up. After a long time doing this, I started to worry. When a nurse came by, she told me to whisper in her ear because the hearing concerns the last faculty to go. She upset me by saying that.

Worse still, she came and gave me a pamphlet that said, “What to expect when someone is dying.” It was so overwhelming that this news coming like this just seemed terribly distressing.

She later returned with her patient’s belongings bag which contained all of his belongings – what he was carrying – his wallet and his watch. I was carrying this big bag and got upset because I had parked far away to avoid parking fees.

On the fifth day I was about to be discharged when the phone rang and it was the hospital that gave the worst news, that he had died around 7am.

Then they asked me if I wanted to see him. I said I didn’t know. So the woman said, “Well, if you’re not sure, then you better do it because later on you might regret not seeing it.”

So I decided to do it and it was downstairs where he was lying wrapped up like a mummy.

I thought it was odd that there were beads of sweat on his forehead, as if he was struggling.

It was horrible because I had never been in a hospital morgue before. Under the tight confinement, I could not organize anything for his funeral. The undertaker I called told me he wanted the money, then he came back a few days later with the ashes.

The lockdowns have been so horrible. I did some gardening and before it wasn’t so bad we met I played a lot of Scrabble and Graham asked me if I’d like to learn chess. My brother had taught it to me a long time ago but I didn’t remember it very well.

Graham pulled out the chess set and said it was his grandfather’s game that he had made by hand. I watched it for a very long time and was amazed by all the details of the parts. It was extraordinary that this wooden set could be carved entirely by hand.

Graham told me the story behind it all. The chess set had been handcrafted by his grandfather on his father’s side of the family. Graham told me that when he was a little boy he sometimes went and stayed with his grandparents in a villa in Kingsland.

His grandmother was quite cheerful and would talk to him when she tasked him with doing chores in the kitchen stirring this or measuring that. They had a lot of good times together but he wondered why Grandpa was still in that room at the other end of the house.

He would just go out, have his dinner, then walk back into that same room and close the door behind him, like he just wanted peace.

One day Grandma told Graham that Grandpa had gone overseas to fight in World War I and he had fought at Gallipoli and he was never the same again, so he had a small carpentry shop in the spare room and just worked making wooden things like the chess set all day.

One day, Graham says, the grandfather told him he would take him to the woodworking room and show him around, as long as he didn’t touch anything. Apparently there were all kinds of items in various stages of manufacture. Graham would have been a brilliant little guy and would therefore have understood all the elements at different stages of construction.

Graham was delighted that the game of chess had been passed on to him. He received it as pictured, with the small piece of fabric – tied in a knot [below]- on the main container which contained all the parts. 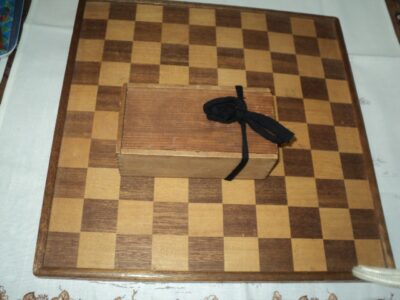 When I look at his detail, I think of all the hours he must have spent carving the delicate little pieces. I guess that may have been his way of coping with what would have been an absolutely horrific time to go through, the terrible fighting in Gallipoli where so many lives were lost.

I showed the chess game to John Spiller, local council member of Howick, knowing that his brother Paul is an avid chess player and also a champion chess player.

I was quite amazed when John – with his keen eye for detail – flipped the board over and noticed there was a set of checkers on the back.

Graham took me to Kingsland where he tried to find his grandparents’ old house. He thought he had found it but wasn’t absolutely sure, as there were a few similar ones.

Incidentally, my grandson Billy was at a chess club in Howick Intermediate and the Times ran an article about it with a picture of Billy.

I was taking a photo of them as my brother Warwick lives in Canberra and was there for a short break.

However, in the background you can see Billy and Warwick totally engrossed in a game of chess with the chess set made by Graham’s grandfather.

After their match, Graham realized that Warwick had won but Graham told him, “If I were you, I wouldn’t be playing Billy again.”

He is now fully grown and currently in the United States where he has a great job using his extraordinary artistic ability.

It is very likely that Billy will inherit this remarkable chessboard. I often think of Graham’s grandfather, how many hours he must have worked in that carpentry. It sounds sad to think about it, but people have different ways of coping with trauma.

Around Anzac Day I always like to be at a poppy stand for the Howick RSA and also go to Waikumete Cemetery to lay a poppy or flowers on my father’s bronze plaque. SA Hughes. He fought in the 35th Battalion, 3rd Army in the Pacific as Vickers Gunner Sergeant.

While our grandchildren Billy, Nicole and Jorgia laid flowers for the grandfather they never knew, Graham searched through the many numbers for his grandfather’s plaque. There were so many from Gallipoli. Then the sky opened up and the heaviest rain fell and we had to leave.

Maybe this year I can go west and find him.